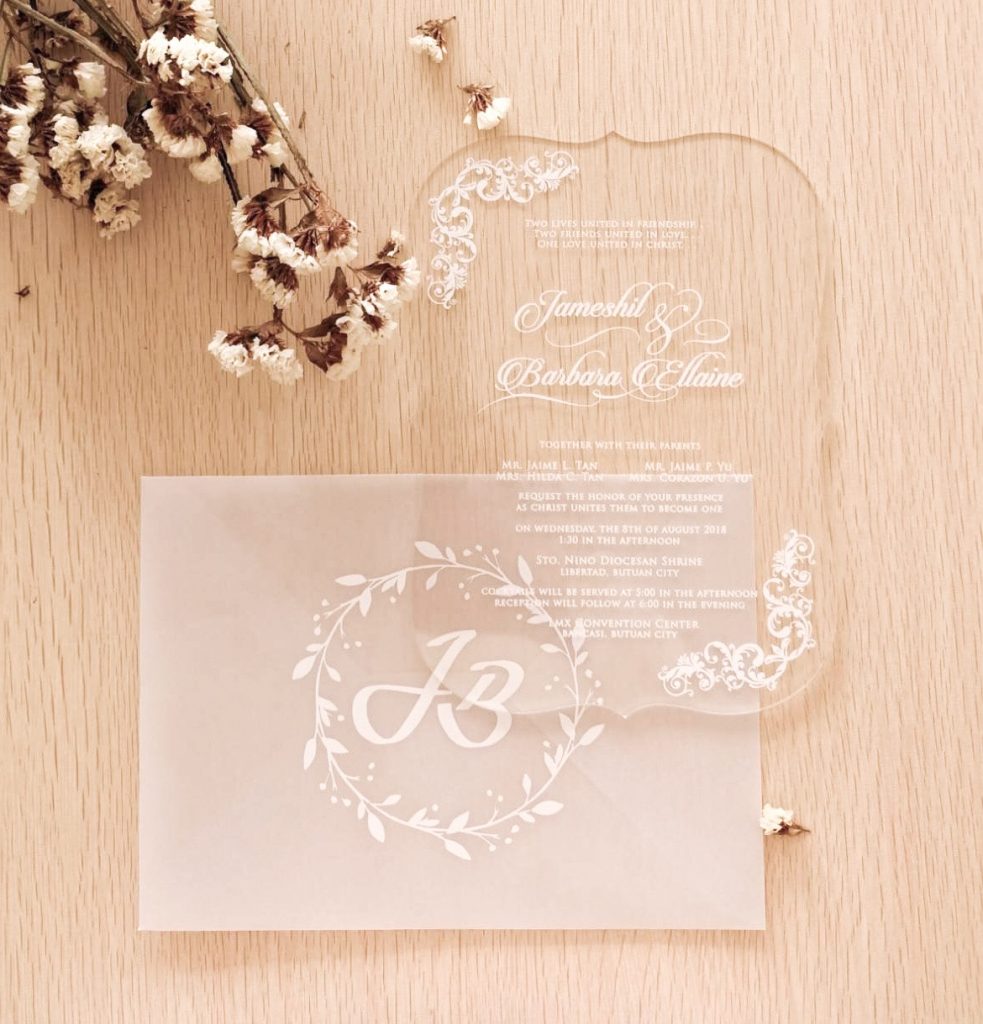 Living in a world where we are slowly being surrounded by more and more technology every day, one thing remains constant: paper still fills the sentimental void in everyone’s hearts. But just as the world progressed, the art of immortalizing important life events on paper leveled-up too with modern calligraphy and the production of more curated stationery.

So just imagine our excitement when we were scrolling down our Instagram feed one day and stumbled upon the work of Pinterest-worthy Cebu-based CDI Designs led by Corinne Go who uses different mediums to tell the stories of couples through their wedding invites.

Barbara called from Surigao to ask if it was possible to use an acrylic instead of the usual paper. My heart skipped a beat because I was so excited to try it out, excited to make mistakes, and do it over and over again until we produce an outcome that Barbara had always envisioned. The outcome? Well, it was one that made Barbara and I (and my whole team) truly proud!

There was a time when a wedding invite simply indicated the wedding logistics, the names of your entourage, thrown in with a small RSVP card. Today, a wedding invite is a perfect introduction to your whole love story, like a teaser before the speeches given by your loved ones and the series of SDE videos.

Raul had proposed to Corinne underwater during one of their scuba diving trips and thought to show that on a laser-cut invitation. As both of them grew up with different cultures, they thought that it’ll be nice to make the invitations in 4 different languages: English, Swiss-German, Spanish, and Catalan.

We asked Corinne about the creative process of the wedding invites and the best parts about being one of the storytellers, so to speak, of the couple.

“My favorite part is the thought that our job is never boring. Every bride is always their own person, so I love listening to their story and creating something that is uniquely their own.”

Joanne was the girly-girl type while Anthony is a straightforward no-accents kind of a guy. So, they were looking at several options to find a good compromise. At last, they had agreed to this old rose and burgundy floral invite, with an equally beautiful floral envelope liner.

Tommy’s family has been a client of mine for several years. This time, Christine said: “Go ahead. Do whatever you think is best. I only want a nice laser-cut band around the invites.” When the first prints came out, I took a photo of it and she said: “It’s so nice! It is better than I had ever imagined.”

“Share to your printer your love story so they can get to know you more. Don’t be intimidated by what you see on social media and don’t hesitate to tell your printer your preferences. This way, we can come up with what you truly like that best fits their personality.”

‘Love at first flight’ because she was a stewardess and he was a pilot. They decided to get married in Toulouse, France so, we thought to feature and print the Capitole de Toulouse in letterpress to give the invites its unique personality.

Even though CDI Designs is based in Cebu, Corinne accommodates clients from Manila as well as from other parts of the world (she has had clients from the United States, Germany, and Australia) where she coordinates with her clients via email or through Facebook messenger.

When I showed Sean and Wiktoria my samples, Sean had already set his eyes on the passport and boarding pass invite. When Wiktoria and I asked why he liked it, he simply said: This is something that I have not received before and I’m sure our friends and family (from all over the world) would love to come to the Cebu, Philippines when they receive this.

With wedding invites as beautiful as this, don’t be surprised if your guests might even keep it as a souvenir!