Wallis Simpson, the Duchess of Windsor is known for her impeccable fashion sense, her magnificent jewelry collection and yes, her affair with King Edward VIII which led to his disastrous abdication.  The love story between Edward and Wallis has been written about extensively and even immortalized in Madonna’s acclaimed film – W.E.

All facets of Wallis’ life have been covered but let’s focus on one of her most important jewelry, her emerald engagement ring. On October 27, 1936, King Edward proposed to the twice-divorced American socialite with a dazzling 19.77-carat rectangular emerald flanked by diamond baguettes made by one of their favorite jewelers, Cartier. According to Jacques Cartier, the gem was one of the two stones cut from an emerald as large as a bird’s egg which once belonged to a Grand Mogul. 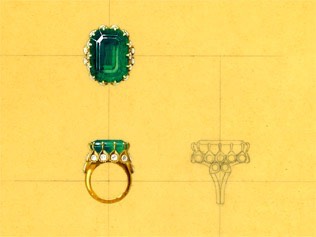 The flashy engagement ring had several sentimental meanings behind it. The phrase “We are ours now 27 X 36” engraved on the interior of the classic platinum band bears the date of the proposal. The date is particularly significant to the couple because it also marked the beginning of Wallis’ divorce proceedings from then-husband, Ernest Simpson.

The affair and engagement became a national crisis. Immense pressure from the government and the British people were the catalysts in the King’s controversial decision to abdicate on December 10, 1936. In June of 1937, the couple married quietly at the Chateau de Cande in France with titles as the Duke and Duchess of Windsor. In their thirty-five years together, the Duke enthusiastically bestowed Wallis with jewelry often to commemorate specials occasions with lots of small yet personal messages inscribed within the pieces. After her death, her jewelry collection was sold at auction by Sotheby’s bringing in $50.3 million dollars. Included in the sale was Wallis’ engagement ring which, in 1958, was taken back to Cartier to be redesigned with a more modern style consisting of a yellow gold set with several new diamonds.