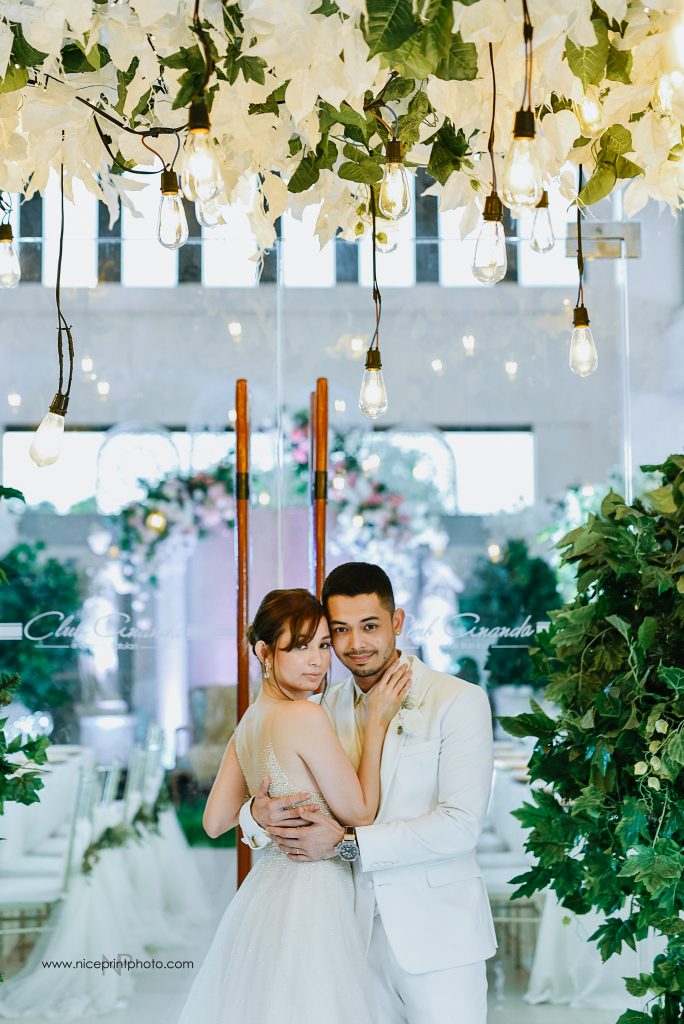 Themed weddings are either difficult to pull off or easy to execute with a clear vision in mind and the right team. Luckily for actor AJ Muhlach and his bride Anna Mabasa, they were able to find the perfect suppliers to bring their dream wedding to life.

As fans of the popular book series, Percy Jackson and the Olympians by Rick Riordan, the couple was locked in on a wedding theme that revolved around Greek mythology.  The Grecian-inspired elements of the wedding from the bride’s Greek goddess ensemble, reception décor and overall color scheme were products of meticulous planning that took nine months.

Finally, on May 20, 2019 (which incidentally was also the groom’s birthday), the pair tied the knot at the Iglesia Ni Cristo Lokal ng EVM in Tagaytay. The ceremony and reception were planned and organized by Cathy Ebuen of Events Embassy.

The bride and the groom channeled their inner Percy Jackson and Annabeth Chase, characters from the popular book series for their bridal looks. Anna sought the expertise of bridal and eveningwear designer Vee Tan in creating her goddess bridal gown. She wore an ethereal gown with a delicately embellished mesh bodice over a ball skirt made from layers of tulle in shades of ivory and subtle champagne.

She kept her hair and makeup simple yet pretty and accessorized with only a pair of simple teardrop-shaped faux diamond earrings and a golden bangle given to her by AJ a day before the wedding. Sticking to the theme, she completed her bridal look with a pair of gold gladiator heels.

The groom, on the other hand, wore a white suit by Rodel Brinas. Brinas added a monogram of the couple’s initials at the back of the suit embroidered in gold.  In keeping with the modern mythology theme, AJ wore an anchor and helm cufflinks as well as a customized golden trident pin made of wires by artist Macky Combe.

Wanting to keep the bridal entourage look clean, crisp and uncomplicated, the bride gave her maid of honor and bridesmaids freedom to decide whatever design they wanted as long they were flowy since she wanted them to look like goddesses. The ivory dresses they wore were made at Mercy Tongol’s dress shop. The simplicity of the designs made it easier to add a few details to go with the theme. Just like the bride, they clutched keepsake bouquets using handmade faux flowers by Dusty Rose Florals. The groomsmen were relaxed dressed in their white linen Uniqlo shirts and cream-colored pants.

Coming from big clans, all 150 guests were ushered at the lush and serene Club Ananda at Sandari Batulao for the reception. Mt. Olympus was brought to life by set designer FJ Sioson who did a beautiful job in adding Greek pillars and statues to go with the theme. The reception hall was decorated with overhanging white flowers surrounded with green foliage and drop bistro lights. Tables were dressed in pristine white linens decorated with floral arches, lights, crystals, and golden accents. Chairs were dressed in tulle fabric secured with pretty green sprigs.

A wedding feast fit for the gods was provided by Juan Carlo The Caterer while the couple’s white and gold cake with shell accents was created by Honey Glaze Cakes.

Guests were entertained with performances by the likes of Sam Mangubat and AJ’s niece, beauty queen Alyssa Muhlach. As an added treat, the couple even arranged a screening of the final episode of Game of Thrones for their guests who happen to be fans of the popular series.