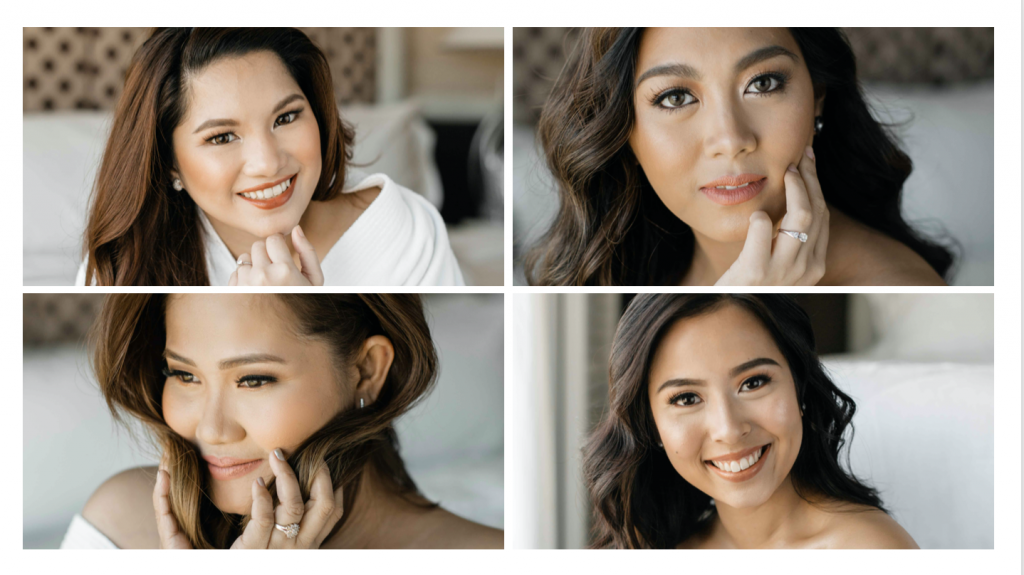 WE absolutely love the diversity of our brides’ looks for this issue! Scroll down and see four amazing bridal transformations, courtesy of these makeup artisans.

Jenina, better known as “Ina” is a 25-year-old who manages her parent’s businesses while running her own design and events company. She tends to be preoccupied by her many passions but at her core, she’s an artist who paints and reads business books whenever she can.

Even with her busy schedule, Ina still finds time to maintain her skin and has found a simple skincare routine that works for her.

“I really don’t put much on my skin. When I wake up I drink a glass of water, take a shower, wash my face with Cetaphil, and pat ice cubes on my face before I leave the house.”

She also religiously takes off her makeup at the end of the day no matter how tired she is and does her whole skin regimen all over again.

Once, in her last term of college, Ina spent the night at a friend’s house to work on a construction project. Her friend, in turn, had invited a few other friends over.

While taking a turn at the billiards table, her would-be boyfriend and his friend walked towards them and asked if they could play in pairs.

“He looked  at me and said ‘We can be in a team then they can be a team,’ while looking at our friends.”

Being in a romantic relationship was really not her top priority at that time so when he texted her after at around 2 am, she didn’t reply right away. She prayed about it first.

“If this human being will not stay with me for the rest of my life, do not allow us to entertain each other,” shed asked. “But if this human being is the right person for me, please allow me to be the best version of myself for him, If I am meant for him.”

She replied the next day. And they have been together now for more than six years.

Last year, at sunset, in front of their families in Acea, Subic, her boyfriend proposed.

“He prepared the surprise proposal a few months before, with the full support of his humble family and with my family’s approval and help. They all planned, coordinated, styled, and captured the proposal by the seashore. With all the lanterns, our old photos, and our loved ones along the aisle, it was the perfect sunset with the ocean and cool breeze of air. I saw an angel ready to enter a new life with me. That was one of the best moments of my life.”

Makeup Artist Eddi Mar Cabiltes and Ina both agreed that they wanted it to be as natural as possible. Eddi says the bride’s best features are her eyes and lips so he really wanted to highlight that in her look. The fresh and natural makeup was complemented by soft, bouncy curls—achieved using a medium-barreled curling iron and spritzed with hair spray for lasting power.

“The look that was created for the shoot made me feel really confident about my wedding suppliers and myself. I’m really comfortable with Tito Eddi Mar’s masterpiece and how professional he is in making someone else’s crown glow. Finding an artist that has been in the industry for quite some time is a must. Let go and give your 100% trust to your artist.”

An adventurous lady, both with her food and travels with her family, Jamille enjoys doing yoga and watching series to unwind.

She’s a no-fuss girl when it comes to beauty, usually just applying sunblock every day to protect her skin from harmful rays. On some days though, she opts to do extra steps in her beauty routine by drawing on her eyebrows and adding a lip and cheek tint for some color.

Jamille met her fiancé early on in life as she met her while they were still in high school.

They both like to eat at their staple restaurants and watch movies together.

“I love that he’s very supportive, caring and that I can always count on him. Consistent for the last 13 years and counting.”

The high school sweethearts got engaged when her boyfriend, together with his family, orchestrated a plan to sneak in a photography and video crew to capture the special moment. They pretended that it was a family photo shoot and when it was Jamille and her boyfriend’s turn to get shot as a couple, he popped the question. Jamille says she didn’t even suspect a thing.

True to her low-maintenance beauty philosophy, Jamille just wanted to show her natural face and didn’t want too much makeup on. The goal was to be a pretty, glowing bride.

Tasked to accomplish that mission was her makeup artist, Toni Rodriguez, who noted that the bride already had a very angelic face so a more sexy and fierce look was chosen. Jamille’s eyes were also highlighted to draw attention to them.

All the hard work paid off because at the end of the day, Jamille thoroughly enjoyed the new look.

“I love how Toni made sure to spend a good amount of time to prep my skin first. She made sure it was moisturized before putting on the make up. The peg for this shoot required heavier makeup but Toni still really made it look as light and wearable as possible.”

On weekdays, Jane is an accounting associate who loves beauty and hopes to  incorporate that love into her career.

But when the weekend rolls out, Jane becomes a professional binge-watcher of Netflix and Korean dramas. Her Korean obsession extends to her beauty habits as well, with her skincare routine being almost made up entirely of K-beauty cult-products.

As for her makeup looks, she usually likes to keep it fresh by only using concealer for her under eyes and blemishes, detailed brows, some cheek tint, and nude lipstick. But she does bust out the occasional pop of color on the lips.

Before sliding into DMs was a thing, Jane’s fiancé was already messaging her on Facebook when she was in college. Since he was a total stranger, Jane didn;t reply for a long time. Then, one day, she got bored and finally decided to answer.

After discovering his great sense of humor, it didn’t take long after they made it official—just a week after he started courting her. But Jane also had another reason for immediately agreeing to be his girlfriend.

“I know that a week is kind of fast but I just thought: guys always have their best foot forward during the courting stage, and I really wanted to see who he really was—I mean without him trying to show me just his best. I wanted to see his worst side, that way I’ll know him better.”

She asked for a sign from God about her future betrothed. She said that whoever she ended up dating in her fourth year of college, it would be the man she was going to marry. And true enough, it did happen.

As for how he popped the question, it wasn’t elaborate or heavily planned. What Jane got instead, was a really, really great gift on her birthday. At 12 midnight, her college sweetheart greeted her a happy birthday, then asked her to be his wife.

It was a simple and intimate way to go, but the how wasn’t really as important as the answer.

Jane says that her eyes are her most complimented feature, so she wanted to highlight them for the big day.

Makeup artist Chinky Tanjangco agreed that the eyes were to be the hero of the look.

“Jane has beautiful eyes and I wanted to highlight that feature. So, I created a bronze smokey eye and kept the rest of the makeup soft and clean. I balanced her look with highlighter to keep the base fresh and natural-looking, which is a must for bridal makeup. Her lips are also nice, but to not take away from the smokey eye, I chose a nude shade for her lips.”

For the hair, Chinky opted for soft waves that complimented Jane’s hair length.

“I was surprised to find out that having that minimal bronze effect would look good! But all in all, it was a makeup look I think I’d love to get on my wedding day,” shares Jane.

Jules is an Industrial Engineer who finds e-commerce and logistics thrilling. When she’s not working, she loves trying out food with her fiancé and has even taken some basic culinary lessons.

Jules is expressive in how she dresses, whether in military boots or colored hair. But as bold as she is in her fashion choices, she can’t be with her beauty routine. Her atopic dermatitis has left her with really sensitive skin.

“I make sure that my skin is always hydrated, well-moisturized, and I also keep soothing creams on hand to control the inflammation on my skin.”

That doesn’t stop her from enjoying makeup, though.

“I like putting on cosmetics and having a sense of accomplishment when I can be proud of my handiwork, even if it’s just lipstick and mascara. I am proud of my morena skin and I love how berry tones look on me!”

Jules and her fiancé met in a classroom back in college as she sat on the only chair left, which was next to him. He would invite her on study dates, though it was also an excuse to spend time with her.

They enjoy discovering hole-in-the-wall restaurants and would occasionally splurge on a buffet or plan out adventures involving food. It was their love of food that really brought them together.

For his proposal, her then-boyfriend reserved the top floor of a restaurant and put fairy lights on the ceiling. There were candles and flower petals leading to where he was standing and that was where he popped the question. It had taken him days to set it up.

But Jules also had a secret of her own before the proposal.

“Before he even asked the question, I already knew that he was the one for me. From the start, everyone in my life: family, friends, even the dogs, liked him for me. And the fact that people saw how good he was and how happy he makes me, made me love him even more.”

With an ethereal theme with lots of greenery and warm lights in her mind for the wedding, Jules wanted to maintain her morena tones and keep her beauty look warm. She also wanted to highlight her eyes and naturally rich eyebrows.

Makeup artist Toni Aviles also had the same vision in mind: “As a bridal makeup artist, I love creating a look that best complements the natural beauty of every bride, focusing on areas that my brides really want to pop, both in photos and in person. I mixed a warm palette with earthy hues to give a natural look for her but also brings out her most prominent features.”

“I felt like a doll!” Jules shares. “I never imagined finding myself beautiful in a look like that. Toni immediately saw the problem areas of my skin due to my eczema, and meticulously saw to it that the discoloration of my skin and inflammation were gone by the time she was finished with my look. I wasn’t used to wearing light lip colors, but the color she used really went with my skintone.” 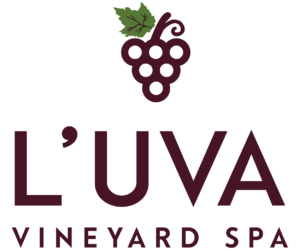