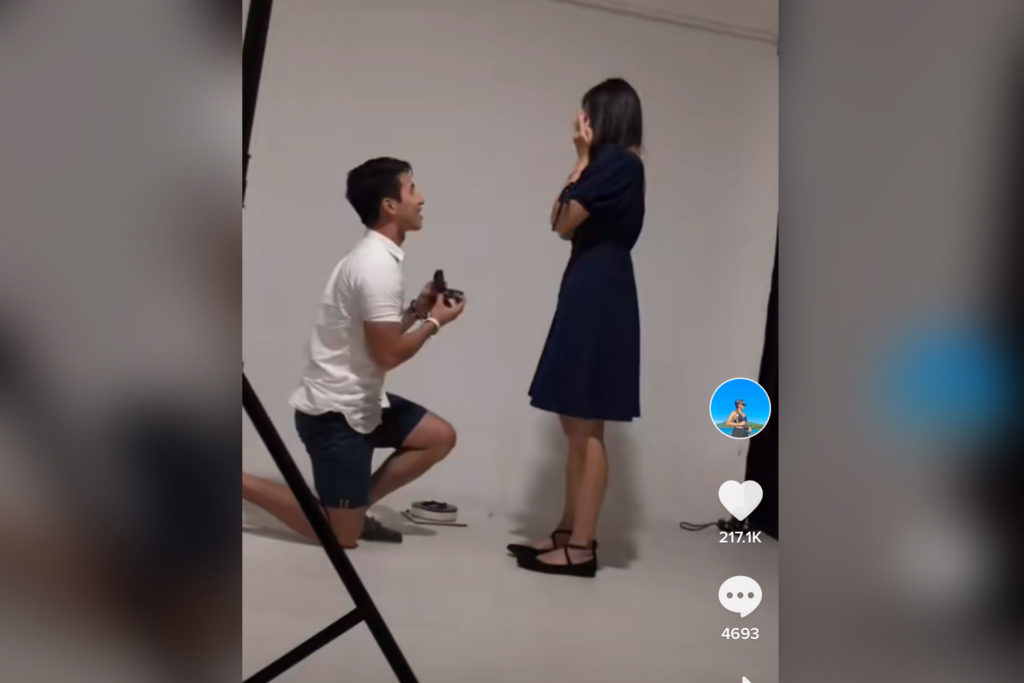 Irvyne and Aina Bayot have been married since November 11, 2020, but they only posted about their romantic proposal just last June on Aina’s TikTok account. It has become viral with over 200,000 likes and have made many cry happy tears for the couple.

“The proposal happened last May 16, 2020, right after the lifting of ECQ (Enhanced Community Quarantine) here in Batangas,” Aina tells Wedding Essentials. And it was a surprise proposal. The couple have been seeing each other for about nine years, but only became official last 2016 upon getting their parents’ approval. They have been talking about marriage a year before the proposal, with discussions on getting married last 2020. But the pandemic happened, and they just subconsciously set it aside for other things that they had to take care of that time.

But little did Aina know that Irvyne had something planned already. “I knew that, somehow, she knew I was going ti propose to her this year. It’s just a matter of when and how, so this surprise is probably the most challenging surprise I pulled off for her. Little did she know that I already talked to her parents secretly last Feb, 2020, a month before the lockdown started. The proposal I did wasn’t really my initial plan, but because of pandemic restrictions and protocols, I had to figure out another way. And it was not until around 10:00 p.m. of May 15 (night before the proposal) that I finally put together the ideas for the proposal,” Irvyne tells Wedding Essentials.

As much as he wanted to gather her friends and family to witness the proposal, it was challenging to do so in this pandemic that we are in. The other challenge was how to surprise Aina, given that she’s used to Irvyne’s sweet surprises.

On May 16, 2020, Irvyne planned a surprise “test” prenup shoot with their photographer friend Topher in his studio. “One of the things we talked about when we were planning for our marriage is our prenup shoot. We both wanted to have a creative/unique style of prenup shoot and we both agreed that we wanted Topher to be our photographer for our prenup shoot, because he’s not only our friend, but we also really love his work.”

“So my plan was to make it look like we just ran into Topher and that he invited us for a fun shoot. We went to Taza Mia, our favorite café. I ordered a whole blueberry cheesecake (our favorite) few days before so it would look like this is my surprise for her on our first date after the ECQ. Topher, who I already contacted the night before, was also in the café to order something and that we would ‘accidentally’ meet each other. He would then invite us over for a fun shoot. It was a no brainer for Aina for us to go with him since we wanted him to take our prenup shoot in the first place,” narrates Irvyne of the successful plan.

Aina still had no clue, all she thought about that day was how nice it was to see Irvyne again after months of not seeing each other. “I was just excited to see him and to finally be able to hug him again.”

And so the magic happened while shooting the couple, with Irvyne opening the cake box to reveal a box with the engagement ring inside. That was his favorite moment. “I saw the look on her face when she finally realized it was a ring box at the center of the cake. I was smiling and shaking at the same time, but I knew that I surprised her!” As for Aina, her favorite would be the whole shoot itself, “I was already visualizing what would it be like during our actual prenup photoshoot. I was already excited to be engaged, not knowing I was going to get engaged that day.”

When asked how they both felt after the shoot? “I was beyond happy! Of course, I knew she would say ‘yes,’ but I really wanted to see her so happy and surprise during the proposal since this is a once-in-a-lifetime experience. I wanted her to remember that day for the rest of her life, and I felt like It was a mission accomplished,” says Irvyne. “I can’t really describe what I felt after all that Irvyne did. Everything was just so magical, so perfect! I am really grateful and blessed to have Irvyne who let me experience the kind of proposal every woman deserves,” Aina gushes.

The proposal, though simple and casual, was a success. Because the most important part of the proposal is when the couple had a wonderful time. The couple ends the interview with these tips, “Wedding proposals don’t need to be grand. It doesn’t need to be expensive. It doesn’t need to be like in the movies. Although there’s nothing wrong with all these, the most important part of a proposal is to know what kind of proposal will be memorable for your partner. Something that she will remember for the rest of her life. It doesn’t have to be someone else’s idea, or something you saw on social media. You should know how to make her feel that she’s the most beautiful woman you want to marry and that she deserves this kind of proposal, whether it be grand or intimate, whether it be in front of family or strangers, whether it be on public or intimate.”